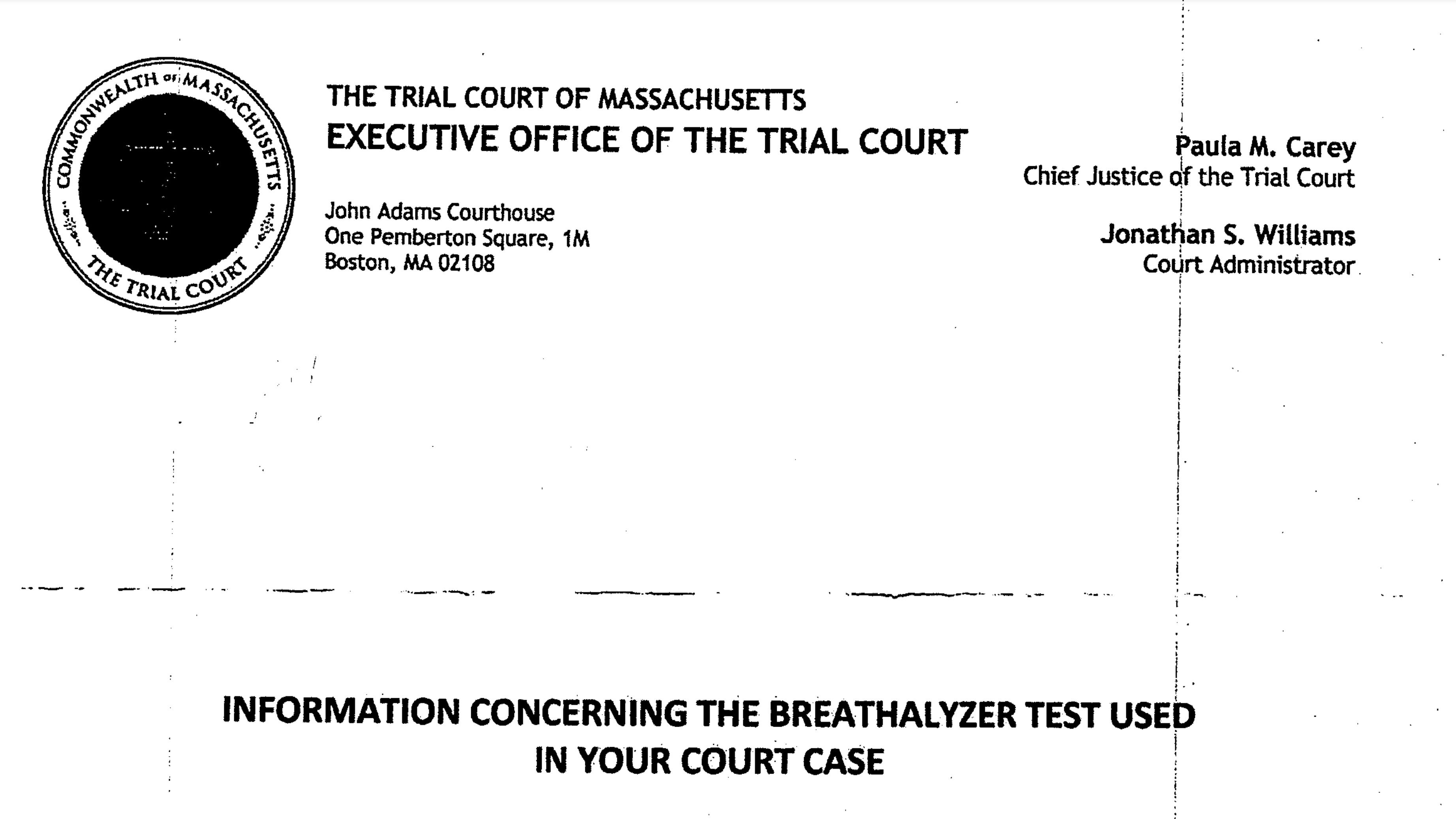 If you’ve recently received a notice like this in the mail, you may have questions about its legitimacy or what it might mean for your previous criminal OUI case. First of all, YES, this is an authentic notice from the court system of Massachusetts. It was sent to let you know that you may be entitled to have a prior conviction for OUI in Massachusetts overturned and permanently removed from your record.

But why is it showing up now, and what is this all about?  Here’s what it means:

For nearly two years (2017-2019), the honorable Judge Brennan put in place a temporary “presumption of unreliability” on breath tests using Draeger Alcotest 9510 devices in Massachusetts. Since this is the only breath test device used by Massachusetts law enforcement, this court order effectively banned Massachusetts breathalyzer evidence from the courtroom.

The ban was on account of evidence that the Massachusetts Office of Alcohol Testing had deliberately concealed evidence of improper maintenance and inaccurate results among Massachusetts breathalyzer tests in hundreds of court cases for OUI. Judge Brennan required OAT to undergo reforms and provide proof that all conditions put in place by the court (process changes, evidence of device reliability, etc.) had been met before the court order could be lifted.

While the ban has since ended (as of July 19th, 2019), the court’s findings will still have a profound impact on thousands of OUI cases that passed through Massachusetts courts between June of 2011 and April of 2019 (the period of flawed test results).

Cases Could Be Dismissed, Convictions Overturned

After an 11-month delay, the biggest shakeup in Massachusetts OUI history is underway. A Massachusetts court has ordered notices to be sent out to 27,000 people around the state alerting them of their potential eligibility for a new trial and verdict. As the notice states, “all breath tests administered in Massachusetts between June of 2011 and April 18, 2019 have been excluded from use in criminal prosecutions.”

Many of the OUI cases in the 2011-2019 window relied heavily on demonstrably flawed technology, which was used to determine the outcome of OUI cases. This means that there is a good chance for a conviction in those cases to be overturned due to insufficient evidence now that the old breath test results are no longer valid.

It’s important to take immediate action and contact an attorney to discuss your options.  Even if the case is a decade old, it may finally be possible to free your permanent record from a conviction based on erroneous and invalid breath test results. If you pleaded guilty (or admitted to sufficient facts) in a drunk driving case involving a Draeger 9510 Massachusetts breathalyzer device between June 2011 and April 18, 2019, you have legitimate grounds to return to court and fight for your future in a new trial using only the legal and admissible evidence available to the state.

Don’t hesitate—act now and contact Attorney James Milligan for a free consultation.  As a top-rated OUI attorney in Massachusetts with over 20 years of exclusive practice on OUI cases and more than 100 five star reviews, Attorney Milligan knows what it takes to beat an OUI charge. We’re on your side and prepared to fight for the justice you deserve now that the malpractice of OAT has been exposed.